I’ve got a friend – a gourmet sensualist who likes to play roulette. It’s an occasional pastime but like Sherlock Holmes, he’ll disappear into the aromatic fug when gripped by the wheel. It’s great to watch – he likes to play two tables at once which requires a deal of cajoling and joking with his fellow punters. He always throws a chip on zero – as a ‘cheap hedge’.

With volatility threatening to settle into new lows for the year, the idea of a cheap hedge has particular resonance. Notwithstanding that the long break is upon us, a veritable black hole of time decay, recent market action suggests that options may be approaching reasonable value. A quick look at the VIX will confirm that it is trading back towards levels that have marked the bottom of its trading range in this post-GFC world: 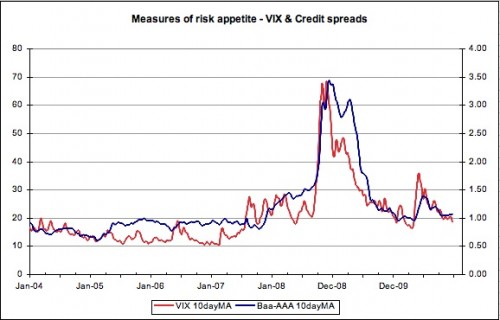 Notably, too, the CBOE put/call option ratio has pushed into territory that is rarely seen.

There is nothing in the rule book that says that this ratio can’t go lower still, nor that it can’t simply hang around these levels for an inordinately long time. The point is simply that the equity options market has pushed to historically extreme bullish positioning. We can see that it has been call buying that has driven the ratio lower: 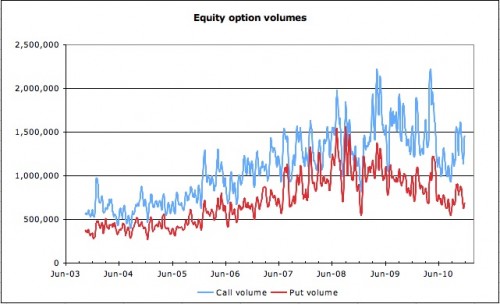 While this ratio can often be viewed as a contrarian indicator, this is not to say that the market must immediately embark on a new leg down. For that to happen, the Fed needs to change its strategy – or have it changed for them. The current over-bought and over-bullish conditions could conceivably be unwound through the market simply trading sideways for a month or three.

Rather this thinking follows more from the logic that the risks are assymetric in the markets at present. While recent profit upgrades by the likes of Goldman’s may come to pass, there is little to suggest that the macroeconomic pin risks associated with debt deleveraging are behind us. On the contrary, high debt levels across the landscape remain the inescapable issue facing governments globally. On this basis, cheap protection has a strong appeal.

Disney Stock Is a Buy, Analyst Say He Was Wrong for Making a Sell Call