Forecasting the S&P500 Using the VIX

McClellan Financial Publications had an interesting analysis last week (here) that looked at “Tracking the VIX response to Price Moves” in the S&P500. A key conclusion of the analysis was that divergences between the two indexes can signal turning points in the S&P500.

The concept seemed a good one – worthy of further investigation.

However, rather than asking how the VIX responds to changes in the S&P500, we turned it around and asked how does the VIX anticipate changes in the S&P500. Perhaps it’s the same question – as who knows which leads which. In any event, it seemed easier to understand a model that mapped the S&P500 as implied by movements in the VIX.

So following are the charts of the actual S&P500 and that implied by movements in the VIX starting from 1Oct09: 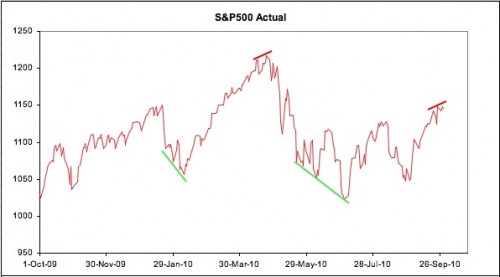 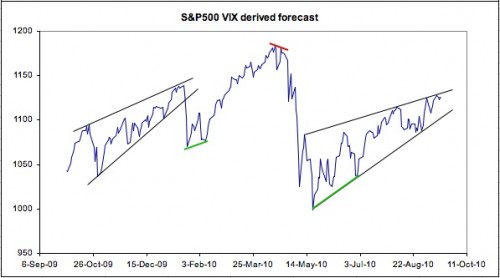 Our results are broadly similar. Three key divergences between the VIX derived S&P500 and the actual price was identified that did indeed precede changes in price direction. At price extremes, there arose a disconnect between the behaviour of option traders and the broader equity market.

Most unhelpfully, the seeming catalyst for McClennan’s article – that we may currently be witnessing another divergence developing was not really confirmed. Though it’d be fair to conclude that the derived S&P500 chart has all the hallmarks of a market undergoing a topping process. We’ll watch this indicator with interest to see how things develop from here.

Note that correlation changes over time and, not unsurprisingly, falls the longer the period under consideration. So that the correlation is ~74% for the period 2004 to today, rising to 79% from Jan08, and is 85% for the last year. As with most time series analysis, the start date will have an impact on results.

In backtesting, though the analysis retained its value. For example, there was a significant divergence between the VIX derived S&P500 and the actual S&P500 index around the March 2009 lows. The longer-term data set is as follows- note the relative performance through 2007: 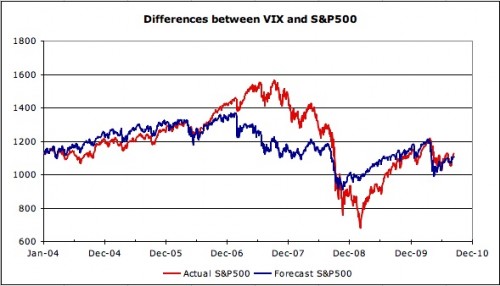