Revaluing the Yuan – and Other Tales from a Drunken Sailor

Not quite a random walk, more like the one lurch forward, two staggers back, that is how the market has greeted the ‘news’ that China will be taking the yuan to a crawling peg. First, risk markets rallied as we all looked inquisitively at each other and asked ‘isn’t this what we wanted?’. Then with bearish trend reversals prominent in markets across the globe, the real response kicked in.

The weight of money now seems to be gathering behind the notion that the Chinese are serious about slowing their economy – and that the crawling revaluation of the yuan is just another plank in this strategy. The clearest prognostication of the market’s reception of these moves to reign in Chinese growth is provided by the Baltic Dry Index:

It’d be fair to say freight rates have collapsed over the last couple of weeks. When we read that Capesize freight per tonne rates from Australia to China were down 25% last week (from Cotzias Shipping here), the simplest interpretation is that the demand for bulk commodities has taken a turn for the worse.

To place this in a little context, consider the following chart of world steel production: 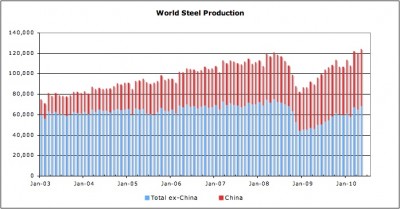 The importance of China to the global demand for iron ore and coking coal is self-evident. But to make the point all the more clearly, consider this excerpt from the World Steel Association’s May report (here)

World crude steel production in May 2010 was 9.8% higher in comparison with May 2007, before the impact of the global economic crisis was felt. However, while China, South Korea and Turkey showed increased crude steel production in May 2010 compared to the same month 2007, the US, Italy, Spain and Japan are not yet back to pre-crisis production levels. The EU is -18%, North America -14% and Latin America -9.8% down on the five months to May total in 2007.

Now the point of this thinking is that the reaction of risk markets to the news about the revaluation is understandable. If we make the broad assumption that the downside risks around Europe have been essentially factored into the markets (for the moment) and that those relating to the US are in abeyance (for the moment), then those around China are to the fore – square and centre. As the science of tipping points go, the yuan news was the proverbial straw on the camel. 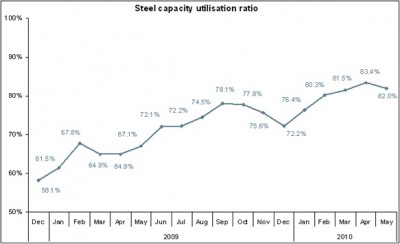