Risk appetite has been ticking higher this past week. The price action in isolation looks pretty positive. The question that is troubling the synapses is whether equity markets are poised to thrust higher once more – egged on by the monetary cattleprod of the US and a seeming stabilisation in China’s growth dynamics. 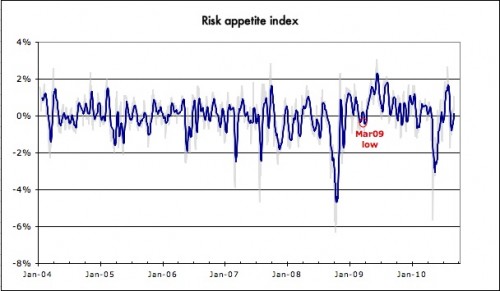 Certainly, the penultimate rejection of the S&P500 off 1040 set the scene for a short squeeze of material proportions. Given the ramp-up in volumes that accompanied the sell-off from the April highs, it’d be reasonable to expect that there’d be a block of nervous ‘shorts’ at levels not too far from here. It’ll be interesting to see what the tea-leaves say about who sold/bought in the Flow of Funds data next week, but the 1130 level is looking like a pretty tasty target. 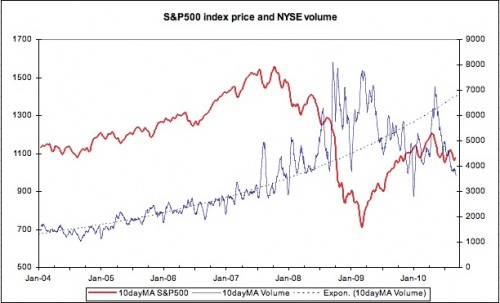 For the moment, it’s probably wise to respect the price action. It’s a reasonable probability that we run through 1130 while under the influence of that big can of nitrous oxide. With declining participation, any buyers ‘on the break’ will be that much easier to suck in. Witness the ever vanishing activity in CBOE equity options. 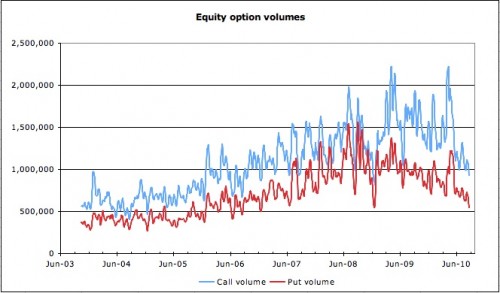 Still, my read of the bigger picture has this run-up as a position driven head fake. Momentum has turned lower since the April high that marked the exhaustion point for global stimulus mark I. It’s looking increasingly unlikely that successive rounds of government intervention will be as wildly successful as the first. While the leading indicators are tracking lower, so will the market.

The other factor tugging at the market’s tail is that the logic for risk spreads to widen remains compelling. The Fed may be the fat kid sitting on the longer end of the Treasuries market, but ultimately the other end of the risk plank can’t join in as the economic malaise works its way through earnings forecasts and default probabilities.

This rally should meet its maker over the next couple of weeks – just a matter of whether it can convince him that all those calories can’t be good for you.