Since the new world order was heralded in by the market naves in March 2009, the commodities complex has been broadly trumpeting the same tune. Whether it’s been due to the destruction of fiat money or the creation of lots of real demand, the trend across most commodity classes has been firmly up.

But the recent ructions in global markets are threatening to derail these broadly held beliefs. Following is a chart of daily copper price with the gold price mapped against it. Note that while copper peaked in early 2011, the gold price has kept pushing to new highs. This perhaps reflects the disconnect between the primal movers for these assets. While copper is expected to preserve value in real terms (the destruction of money meme) – there’s no getting away from the fact that it is an industrial commodity. Gold on the other hand is almost purely a speculative asset – meaning that it is only worth what the marginal buyer is convinced its worth – it has little utility value. 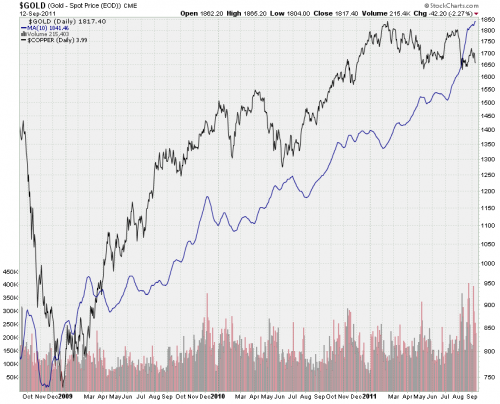 So with the tailwinds from global stimulus nothing but a sweet memory, and the threat to the world order alternating between debt concerns in Europe and the US, and with China pursuing its very own debt funded growth model, maybe it’s not so surprising that copper has been weak. The question is really whether this weakness is a precursor to a deeper correction. 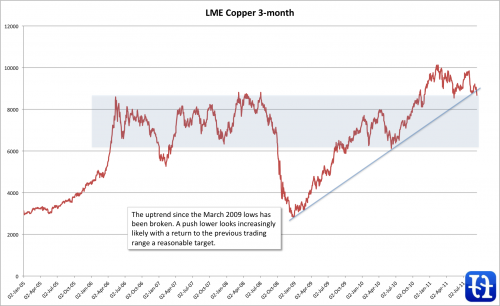 Notably this weakness is broadly matched by declines in the oil price and industrial commodities more generally.

Turning back to gold, it makes you wonder as to whether it can sustain its price strength if the rest of the market is crumpling around it. Certainly, should copper track lower the copper to gold ratio would be plumbing new depths in the absence of a similar move by gold. 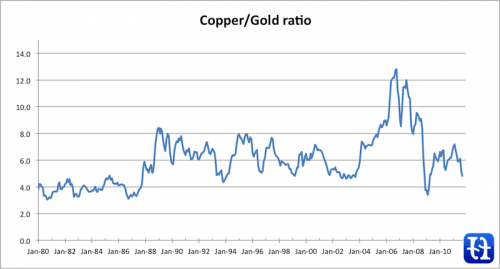