It was a line in Niels Jensen’s article “The Commodities Con” (here) that got me thinking:

Most commodities are in contango more often than not, effectively costing investors the spread between the nearby future and the more distant future every time the position is rolled.

See in my day, commodities were in backwardation more often than not. What happened? It’s a result of the overpowering of physical markets by financial participants. And I’d argue that this investor dominated market structure increases the probability of extreme volatility in commodities prices.

Backwardation is common in a physically dominated commodities market

Once upon a time, the received wisdom from our commodity market elders was “don’t be caught short”. The guiding principle was that while a commodity could ‘only go to zero’, there was no limit as to how high the price could run in a squeeze. In a physically dominated market, the squeeze could kill you. It was not uncommon for the forward curve of various base metals to be in backwardation (far prices less than nearby ones). Contango was generally associated with very low front-month prices (for example during the Asia crisis).

Now I’d like to show you some analysis of how forward curves have evolved over time, but the LME has put longer-term historical data behind a paywall. So let’s just take it as a working assumption and move on. (Note too that all commodities have their own idiosyncrasies that can be expressed in their forward curves – for example, if memory serves me correctly, zinc was more likely to be in contango and displayed less volatility than its compadre nickel which was the opposite.)

What happens when non-physical participants take over

Let’s take this chart of the current copper forward curve, as provided by the LME (here), and extrapolate: 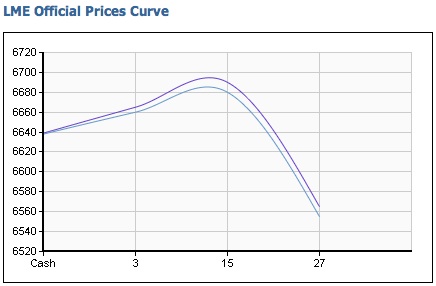 We can see the point that Neils makes – the curve slopes up and away from the cash price until we reach the nether regions beyond the 15-month contract – where presumably liquidity and financing interest tail off. If investors are continually rolling the rock back up the hill (eg. buying 6-month copper – over time it becomes 3 month – roll back out to 6 months and repeat), then they are paying the steepness of the curve every time. It has been one of the primary criticisms levelled against commodity trading vehicles like ETF’s.

This raises another concept that befuddled our gold desk colleagues back at the turn of the century. In the base metal markets, there was no such thing as an interest rate for borrowing base metals (the equivalent of a gold lease rate). It could well be argued that the financialisation of these markets has changed this. When investors buy ‘notional’ copper through a futures contract, they do so on the strength of the balance sheet that promises to pay them the cash equivalent of any profit when the position is closed. The firm ‘selling’ copper has effectively created the metal by leveraging their balance sheet and must be compensated for this. The investor pays the ‘financing cost’ for the synthetic long position.

The long and the short

Neils’ article refers to various research that supports the idea that investors now dominate commodities markets. This situation implies that the massive growth in financial leverage in commodities should lead to large ‘naked’ long and counter-balancing short positions (in the parlance of the times). The buyers and sellers of synthetic copper are entering into transactions where there is no physical metal supporting the trade.

How the market is distributing the ‘shorts’ created by the growth in investment demand is not easy to get to the bottom of. The CFTC has been looking into how ‘index’ investors have affected both the OTC and futures markets since they put out a ‘special call’ in 2008. You can look at their reports (try here and here) – which provide some sense of the scale of the activity but little else. It’s notable that the recommendations flowing out of the report – like separating the activities of swap dealers from the commercial traders where they are filed – have not been acted upon as yet.

You might argue that the financial firms that are creating this liquidity are doing so in the knowledge that there is a wealth of resources yet to be pulled from the ground. And maybe there are. But in my experience, mining houses are loath to hedge future metal production – even if it is simply to take advantage of the steepness of the curve. Also there is a big difference between an ingot in the warehouse and ore yet to be mined. At its simplest, this trend should be understood for what it is – the firms that have sold notional commodities have created liquidity out of leverage. And as is the case with leverage in all its forms, this is likely to magnify the impact of price changes when sentiment turns.

It’s all predicated on the China industrialisation story

It’s been said that the success of marketing commodities as a separate, non-correlated asset class has led to the current situation. It could equally be added that the notion of the ‘industrialisation of the East’ has inflamed the trade.

I’m not arguing against the principle that China (and other emerging markets) have increased aggregate demand for commodities. That much is clear. What I’m suggesting is that creation of a whole investor class that is punting on the same trade, such that the volume of this punt swamps the physical demand, creates an unbalanced market. The motivations of both the shorts and the longs are not the same as producers and consumers of the physical stuff. The price of the terminal market is no longer predicated on actual physical flows but on perceptions of how these flows might change.

This doesn’t mean that the risk is only to the downside. While the weak hands look to be those that have bought the China growth model, equally those that are effectively short the commodities markets do not have unlimited capital. If commodities were to spiral upward in price (let’s imagine hyperinflation caused by a supply disruption), these shorts may find it increasingly harder for commodity punters to take their balance sheet risk. It is not out of the realms of probability that a massive short squeeze could force the financiers of the commodity trade to stop out of their shorts.

Either which way – I’d argue that the leverage that has taken over the commodity markets means that they exposed in a way that has not existed before. As ever, the risk is that leverage will continue to grow until it implodes under its own weight – which given the recent gyrations in risk markets, seems like a material probability. For mine, the risks to the China growth story are crowding upon events – I wouldn’t want to be long commodity producers should the China miracle lose its lustre.

Gold down 1% as US election race tightens, equities are high