The price of Bitcoin has been hitting a new all-time high almost every day while analysts are forecasting it to ultimately cross the $100K level in the days ahead with no idea of how it will be priced by the end of the decade.

How to Trade Bitcoin?

How to Trade Bitcoin?

Bitcoin is a cryptocurrency and it is the latest form of money. It is also known as a digital coin or digital currency. It was introduced in 2009 as a substitute to fiat money after the world saw a historic financial crisis, blamed mostly on monetary policies and banking systems. Bitcoin is working on blockchain technology and it does not require any government and institutional intervention. This is a decentralised system compared to the centralised system of fiat currency.

The world has adopted and supported the invention of blockchain technology prior to marking bitcoin as a legal payment and store of value.

Blockchain technology has already started revolutionizing the world just as the internet has transformed in the last two decades. The demand for the underlying technology behind cryptocurrencies is accelerating in several industries, including the financial sector, manufacturing, data storage, gaming, and many others.

What is Bitcoin price history?

Introduced in 2009, bitcoin and a few other cryptocurrencies have now started being considered a legal form of payment across the world.

But, the first-decade journey was quite harsh for early Bitcoin adopters. The cryptocurrency saw massive resistance and harsh comments from the banking heads, institutional investors, and regulators.

Despite all that, Bitcoin price, the mother of all cryptocurrencies, jumped from $0.008 in 2009 to the $34000 level in 2021. The chart above shows that early buyers become millionaires and billionaires while the massive amount of price volatility has created attractive buying opportunities for short-term value hunters.

Bitcoin traded at around $13.50 in early 2013 and the price jumped to $220 level in April but fell back to $70 in the next couple of days, marking the first big rally and crash.

In November 2013, the price of bitcoin again rallied to $1,075, thanks to bitcoin adoption and the introduction of new exchanges and their use in illegal activities. 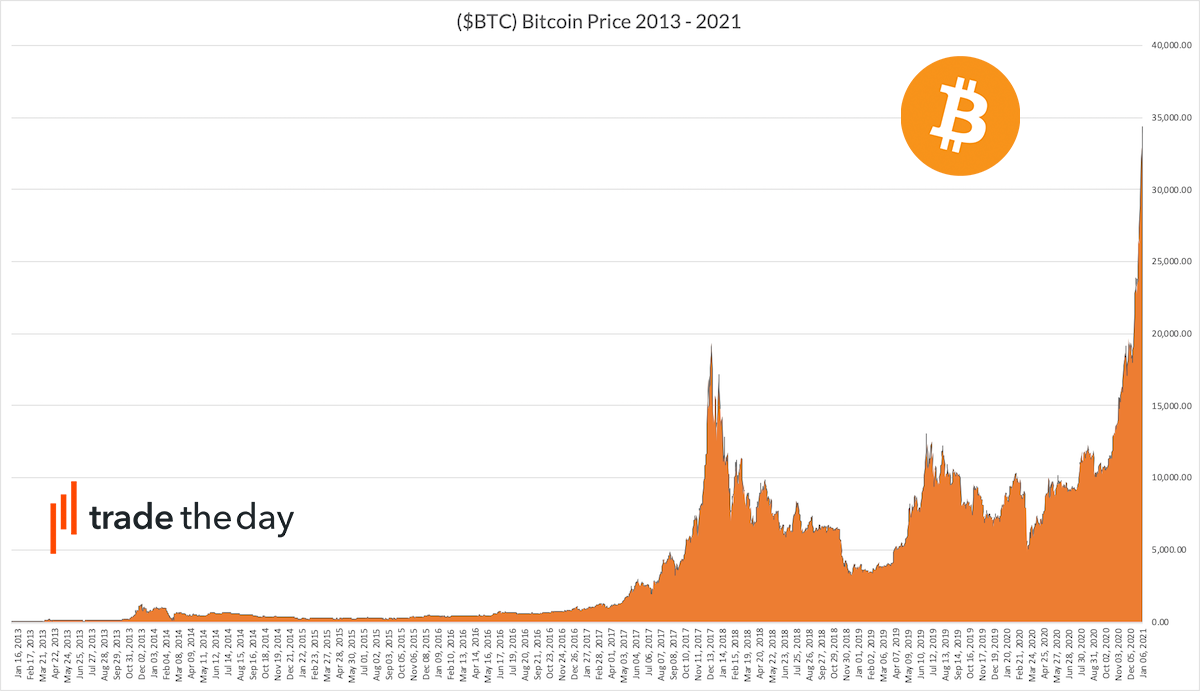 However, the price of bitcoin fell back to $315 level in early 2015 amid Mt. Gox exchange, bans on crypto trading and its use in illegal activities.

Fiscal 2016 was one of the best years for cryptocurrency and it was followed by another stunning year – which will be remembered in history.

2018 was a bad year for bitcoin price because the price of a single coin fell from $19000 levels to $3,500 at the end of the year. Bitcoin regained some momentum in 2019 but the price remains volatile and struggled to generate a big rally.

Finally, everything changes for bitcoin in the pandemic year 2020. The price of bitcoin rose from $7,200 level at the beginning of the year to around $30000 levels at the end of the year.

What factors are adding to Bitcoin's price and its mass adoption?

Store of value and Prospects for appreciation

One of the key factors behind cryptocurrency adoption is the store of value. People buy and invest in bitcoins amid their strategy of storing their money, with prospects of sharp appreciation in the long term. Over the centuries, gold, silver, and other commodities were used as a store of value and medium of exchange.

Bitcoin and the rest of the cryptocurrencies have been working as an efficient means of transferring money; the transactions are controlled by a decentralized network.

The limited amount of supply is among the factors that are contributing to mass adoption. The supply of the largest cryptocurrency is limited to 21 million coins. At present, almost 18.5 million coins are circulating. On the other hand, the supply of excessive fiat currency reduces the value of money and results in inflation.

Cryptocurrencies are under regulator’s reviews. In fact, the majority of developing countries have banned cryptocurrencies because of their use in criminal activities, drug smuggling, and money laundering. As regulations become strong, cryptocurrencies will gain the confidence of investors and the general public around the world.

Like fiat currency, Bitcoin is divisible up to 8 decimal points. This means that you can dividend one bitcoin into ten smallest units or 0.00000001 Bitcoin. The divisibility factor could also help mass adoption as users can take part in the tiny transactions.

Cryptocurrencies are easy to move and transfer from one place to another, thanks to cryptocurrency exchanges and wallets. People store their cryptocurrencies in wallets and they transfer them to other peoples within minutes with very low costs. Meanwhile, transferring fiat currencies takes several days in a current system. The durability of fiat currency in physical form is less when compared to digital currencies.

What factors are making bitcoin a new gold?

Many market observers have been comparing bitcoin with gold over the past couple of years, but the debate over the safe-haven asset status heated up sharply following the latest market rout. Bitcoin bulls often claim that bitcoin has characteristics of safe-haven assets and could work like gold during uncertain times.

Is Bitcoin a new digital gold?

Bitcoin will become digital gold because of its characteristics including round-the-clock price transparency, and no third-party oversight.

The CEO and co-founder of Digital Assets Data said that the move towards digital working systems would permit Bitcoin to replace the gold’s role as the store of value.

“I see Bitcoin replacing gold as the hardest money for savers with long time horizons,” CEO Mike Alfred said. “Young people are far more interested in Bitcoin in a world where the economy becomes increasingly online and virtual,” he added.

Bitcoin bulls also argue that bitcoin is scarce, with the expected limited supply of 21 million coins if all of them are mined. Bitcoin bulls also debate that fear of loss and security issues makes it hard for people to store significant wealth in gold. On the other hand, there is no security issue with bitcoin because they are stored in a wallet and contained in a centralized database called the blockchain.

What are the Differences Between Bitcoin and Gold?

Gold, on the flip side, is also produced through a mining process but the process is entirely different from bitcoin mining. The production of gold is directly correlated to its demand.

Gold has been identified as safe-haven assets over 2000 years while bitcoin has more recently considered as a perfect asset to hold during broader market volatility. However, both are speculative investments as their price movements are not linked to earnings and revenue growth prospects.

In the case of Gold, the price movement mainly depends on demand and supply. For bitcoin, some people see adoption as a growth driver and others believe the number of growth in transactions is a key price driver.

Bitcoin bears argue that gold has a higher intrinsic value compared to bitcoin amid its utility. For instance, gold has high usage in the world from jewellery to spacecraft and medical equipment. Bitcoins, on the other hand, are only used as a transfer of value.

What is Bitcoin price outlook?

Bitcoin’s price outlook improved significantly due to its performance during the pandemic year.

The largest digital coin worked like a safe haven asset throughout the pandemic year. Indeed, bitcoin stood among the best performing asset classes in 2020. Bitcoin price soared by 171% in the fourth quarter, extending the 2020 to 305%.

“Bitcoin and [cryptocurrency] technologies are providing building blocks to a new age of money still almost indecipherable to those outside of crypto. We see a very bright future ahead for all bitcoin holders,” Paolo Ardoino, CTO at the cryptocurrency exchange Bitfinex.

Bulls have fully capitalized on the most awaited events that occurred in 2020. These events include institutional investments, wider acceptance of digital currencies, and its increasing use of valid payment methods. Moreover, several big names and money managers have started backing cryptocurrencies; expecting digital coins to play a big role in the global monetary system.

What’s more, the market analysts are of the opinion that bitcoin price will outperform gold in the years ahead. Former Goldman Sachs hedge-fund manager Raoul Pal claims that if gold soars three-times or five-times over the next five years, bitcoin will hit $1 million in the same time period.

“We’re seeing it emerge as a part of the recommended allocation strategy for institutional investors and investment banks,”

“This underlines just how important this asset has become in the world of investing. Right now, we are seeing a dramatic increase in new retail customers entering the market on a daily basis… Bitcoin is about to become gold for the 21st century.”

Morgan Stanley has set a bullish price target for bitcoin. The team of Morgan Stanley strategists expects bitcoin prices to stand around $146,000 this year. The prediction from these strategists is worth considering because their previous prediction also turns true. They had last predicted that Bitcoin could rise as much as ten times as it competes with gold for institutional investors.

“This implies that the above-$146,000 theoretical Bitcoin price target should be considered as a long-term target, and thus an unsustainable price target for this year.”

“While we cannot exclude the possibility that the current speculative mania will propagate further pushing the Bitcoin price up toward the consensus region of between $50,000-$100,000, we believe that such price levels would prove unsustainable,”

What are drawbacks of investing in Bitcoin?

Bitcoin is one of the most volatile assets in the world. The price has the potential to make big swings in a few hours alone.

For instance, the bitcoin price fell more than 17% in a single day the day after it hit a record level of $34,000. Therefore, if you are a defensive investor, think twice before putting money in bitcoin trades. However, if you want to own bitcoin, the fundamentals factors indicate a limited downside.

The price of bitcoin stood at $0.0008 when it started trading.

Bitcoin was “technically” worthless in 2009 when it was launched, from a fiat point of view. Until this day the true value of Bitcoin is strongly debated.

There are several bullish and bearish price predictions. Some analysts believe bitcoin will be worth more than a million-dollar at the end of the decade.