US dollar plunged sharply once again as prospects for further stimulus measures increased after Central Bank’s around the world stressed on keeping interest rates lower for longer.
The greenback jumped to around 93.5 level on Wednesday against the six major currencies, but the index fell back sharply on Thursday and it is currently trading around 92.90 level.
Economic data also negatively impacted the US dollar value in Thursday trading. The U.S. Labor Department reported that jobless claims were at 860,000 at the end of the last week, up slightly from analysts forecast for 850,000.
The jobless claims fell sharply in the past few months as the economy is growing at a faster pace than expectations. Jobless claims were around 7 million in April this year. 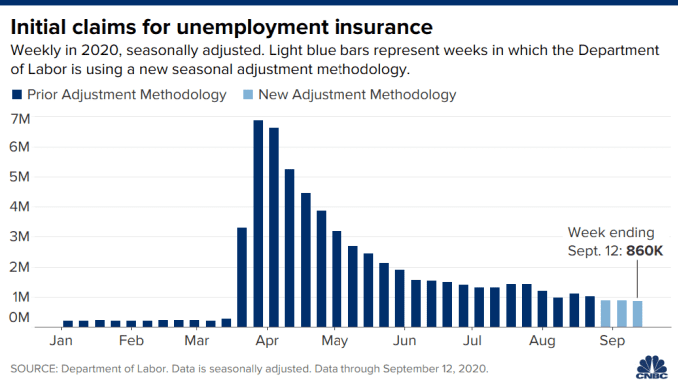 Moreover, continuing claims also fell sharply in the last few weeks. Continuing claims dropped to 12.63 million last week compared to the consensus estimate for 13 million.
British Pound has also been seeing volatile moves due to economic uncertainty and Brexit related trade concerns. The Bank of England policy minutes indicated that the members have thoroughly discussed the impact of negative interest rates on the British economy. The members say they can use negative rates if needed to support the economy.
The gold price soared back above $1950 an ounce on Friday as the lower dollar makes gold buying cheaper for investors. The price of the yellow metal has been trading in tight rage over the past month after peaking above $2000 mark last month.
Euro also remains strong against the US dollar. The common currency jumped to $1.19 level on Friday despite lower auto sales.
The European Automobile Manufacturers’ Association stated that sales dropped almost 19% in August compared to the past year period. Sales fell around 5.7% year over year in July. However, these numbers are still strong when compared to April’s drop of 76%.