European stocks soared on Friday amid reports that the President Trump could be discharged from the hospital later today after he and his wife tested COVID 19 positive last week.

He is admitted to Walter Reed National Military Medical Center. The president left the hospital on Sunday for a short-time to wave to well-wishers.

The hopes of a new stimulus in the United States and Europe grew once again after Trump’s tested coronavirus positive and economic data indicates slowing growth trends.

The US job data indicated job growth rate slowed in the last month while Eurozone inflation fell into the negative range.

The U.S. added 661,000 new jobs during the last month and the unemployment rate hit the lowest level since the pandemic began. 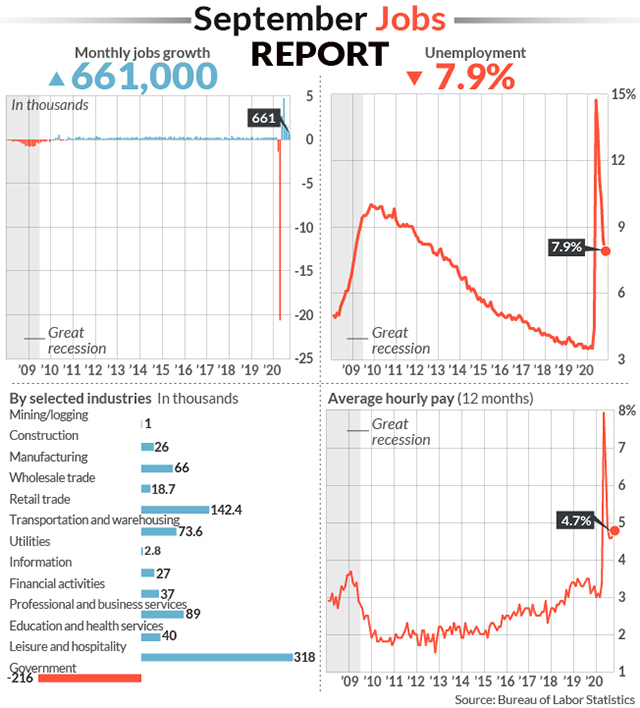 However, the growth in employment rate remains the smallest in the past couple of months, which is pointing to a deceleration in the recovery. Economists were expecting 800,000 job additions for the third quarter.

“At the end of the day, this report probably does not move the needle much,” said chief economist Stephen Stanley of Amherst Pierpont Securities. “The economic recovery continues, though it is decelerating, as you would expect, as we get further away from the lockdown lows.”

Oil price bounced back after generating big losses last week amid concerns over slowing growth and new economic restrictions due to the threat of the second coronavirus wave. US crude oil is trading around $38 a barrel while Brent is hovering close to $40 a barrel. Gold is still trading below the $1900 mark due to the strengthening US dollar.