The whopping Tesla stock price rally of more than 740% in 2020 stunned many pundits, but fundamental indicators and bullish forecasts hint that the stock run is unlikely to stop into the new year.

Tesla stock was one of the best performers in 2020 as the world’s largest electric vehicle company performed stronger than expectations despite pandemic related challenges. Its inclusion in the S&P 500 index was among the biggest price driving factors in the last two months.

What’s more, the rosy demand outlook for the electric vehicle has enhanced investor’s sentiments in spite of lofty valuations.

The electric vehicle company reached the 500K vehicle delivery target in 2020 despite lockdowns and supply chain disruptions due to lockdowns.

Wall Street was expecting Tesla to report 174,000 vehicles deliveries for the fourth quarter.

The market analysts expect Tesla to deliver 1 million vehicles in 2022. 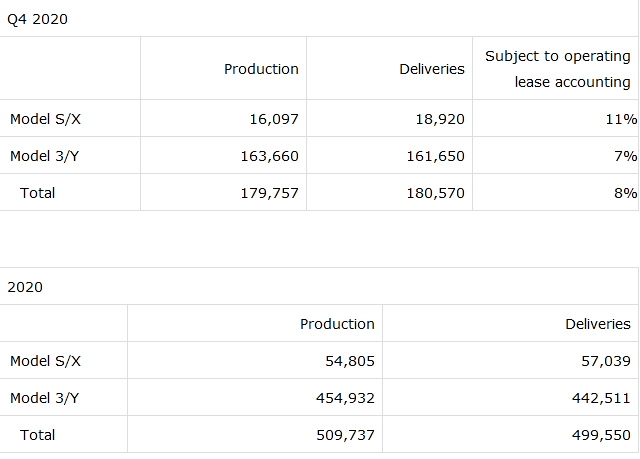 “Heading into year-end and 2021, we are seeing a major inflection of EV demand globally with our expectations that EV vehicles ramp from 3% of total auto sales today to 10% by 2025,” according to Ives, which “will disproportionately benefit the clear EV category leader Tesla over the next few years especially in the key China region which we believe could represent 40% of its EV deliveries by 2022 given the current brisk pace of sales.”

Tesla’s stock price rally is likely to extend the momentum as the company has aggressively been expanding its production potential to capitalize on increasing demand. It is building new factories in Austin, Texas, India and Brandenburg.

In addition, its strong operational efficiencies and increasing profitability will back the bull-run.