Australia and the Credit Squeeze

The Governor of the Reserve Bank of Australia, Glenn Stevens, made a speech about ‘Recent Developments’ on Wednesday (the full text here). In reflecting on the possible impact of events in Europe, he made this assessment:

It is usually the case, however, that the most important impacts on Australia from these sorts of events are not the direct export effects but those that come through the broader global channels – the impact on world and Asian growth, on resource prices and on the cost and availability of global capital.

Leaving aside the revenue side of the income statement for the moment, let’s focus on how changes in the ‘cost and availability of global capital’ might impact the domestic economy.

What does it mean to be an importer of capital?

Australia has a long history as a debtor. As early as the depression of the 1890′s, there were fierce debates about the NSW government’s struggle to repay debts to the Old Dart. It’s interesting that the first use of the phrase ‘living off the sheeps’ back’ was recorded in 1894 (ANU) – ‘living off clause 3.2 of the RSPT’ just doesn’t have the same ring to it.

Over recent decades, our net foreign debt has been on the rise (chart from Parliamentary Library here):

Allowing for differences in calculation methodology, the trend is clear. Net foreign debt has been rising – and not simply because we have been investing in new productive capacity.

To place these charts in context (if we are to believe Senator Barnaby Joyce here),

We might want to keep our membership of this club between ourselves.

But does ‘net foreign debt’ matter – it’s not as if we can’t pay our bills, right?

While there is little doubt about the solvency of Australia, particularly given low public debt and our superannuation savings, there are good reasons to ask whether our level of foreign debt leaves us exposed to rising capital costs – that would impact both domestic interest rates and growth. In fact, this is exactly what Glenn Stevens is alluding to.

The IMF in its latest Fiscal Monitor (here), made this observation:

Both net and gross debt are important indicators for fiscal analysis. It is generally agreed that gross debt is a better indicator of rollover risk. For assessing solvency risk or for examining, say, the impact of debt on growth or interest rates, however, the superiority of gross over net debt is less clear cut.

Following is a table of Australia’s foreign debt by maturity from the ABS’s Mar10 Balance of Payments data (here):

On the face of it, as a country, we have a significant short term funding requirement. (Note that $41bn of the ‘less than 90 days’ gross assets belong to the RBA as reserve assets.) And where do these debts come from?

That would be the financial institutions that have been funding our $1.25 trillion in household debt habit.

Australia’s foreign debt burden has largely been driven higher by our residential housing cycle. As the RBA has said (here),

With the global repricing of risk and competition for capital, the downward trend in interest rates has reached its end. And if the cost of capital is rising globally, then this will ultimately feed into domestic interest rates.

At the very least, this will crimp household disposable income and discretionary spending. At worst, mortgage stress in the younger suburbs of our cities will become more commonplace.

In a foreign debt context, this income to interest relationship is captured by the ratio of interest on net foreign debt to exports. 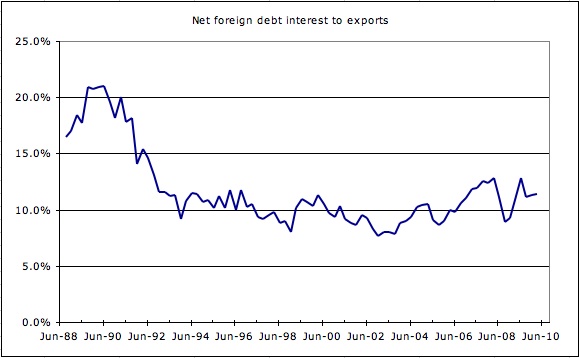 In an eerie echo of the RBA’s statement about our housing debt, as a country, we could say

“higher commodity prices have allowed Australia to take out bigger foreign loans, without increasing debt repayments as a proportion of income”.

While there is little doubt that Australia is reasonably well placed to manage the current state of affairs – the risk is that the ongoing squeeze in capital costs is accompanied by a stumble in our biggest customer, China. Under this scenario, we might see both sides of the ledger under attack.