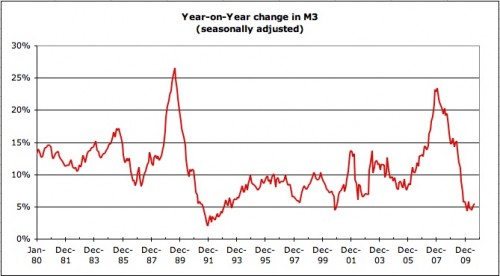 It’s the housing sector that continues to support debt growth, though lending to business has stabilised and the government is doing its bit for Queen and country:

Zooming in on growth in housing sector debt, we can see that it is at historically low growth rates. 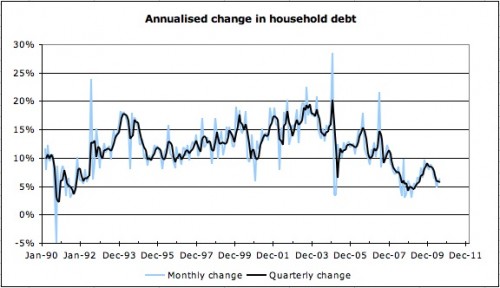 Which brings us to the Chart of the Day – it takes a look at lending by sector as a proportion of the total. From 1990, the housing sector has risen from 20% of total lending to more like 55% currently.

Now it could well be argued that the business sector went through a property fuelled credit binge of its own that imploded in 1990, and hence the initial decline in its percentage was something akin to ‘normalising’. But still, with the likes of Centro, Allco and Babcock et al doing some seriously heavy lifting more recently, don’t think we can argue that the housing sector was alone in enjoying the credit boom.

So what does it mean? While the housing sector has been shown to be the engine room of a developed economy – given its multiplier effect on consumption that makes up ~70% of GDP – making more houses doesn’t really add to the productive capacity of an economy. If the villagers spend all their time carving huge stone heads to put in their living rooms, then who is left to tend the crops? This trend goes a long way to explaining why GDP growth has failed to keep up with house price growth – or more simply why our incomes haven’t kept pace with mortgages.