Commodity Prices – The Grotesque in the Attic

Global industrial production is set to climb again – as it waddles after those cardigan-wearing purchasing managers: 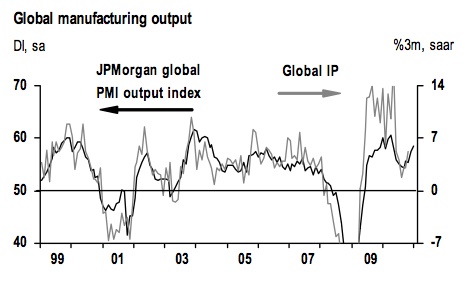 The US PMI rose to an eighty-month high in January, while its counterpart in the Eurozone hit a nine-month peak. The UK PMI rose to its highest level since (UK) data were first collected in 1992. Meanwhile, the China and India PMIs crept higher from December’s three-month lows and an expansion was signalled in Japan, albeit only slight, for the first time since last August.

Only Australia and Greece were on the contracting side of the ledger. On the face of it, this ‘fundamental’ demand should throw a supportive bid behind commodities – and may help explain why the major miners have caught an updraft over the last couple of days. (Chart from Investment Postcards from Cape Town here) 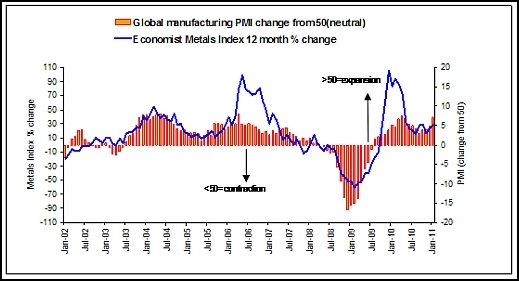 Yet it’s reasonable to ask whether it is only fundamentals driving commodity prices. While it might well be argued that base metals have at least paid some attention to the ebbs and flows in industrial production, the relative strength in gold suggests that there may be more to the story. 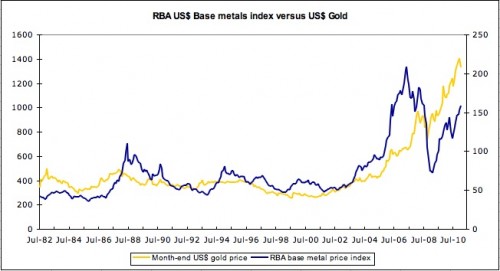 Similarly, supply constraints cannot explain the entirety of the recent rise in foodstuffs: 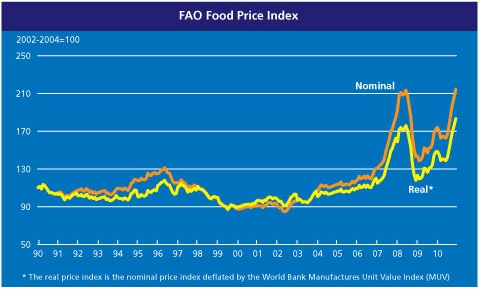 Bernanke (at the National Press Club here) claims that higher commodity prices are the result of emerging world demand and supply constraints. This is true – at least in part. Certainly, weather patterns over recent times have not been conducive to agricultural production nor for the supply of some industrial commodities. And yes, emerging world demand has been strong since early 2009.

But this is too simplistic an explanation as it ignores the role of government and speculation in driving commodities prices.

Without exception, ‘fundamental’ demand has been strong due to government stimulus efforts. Most particularly, the rise in emerging world demand was intimately tied to the launch of China’s huge monetary stimulus in 2009. This trend has reached its end. China is tightening money – and other emerging economies have been applying their own capital constraint measures. The fall in the Baltic Dry Index may be partly inspired by oversupply, but fading ‘fundamental’ demand is also at play. It is no coincidence that Chinese equities have also caught a cold.

The reversal of stimulus policies reflects a need to slow price rises. For example, food prices are said to comprise 35% to 40% of disposable income in China and are higher in other emerging economies. Higher food prices will inevitably squeeze demand, and more ominously, lead to unrest. It’s notable that at the same time Bernanke was making his speech, UNCTAD was hosting a conference on Global Commodities with the explicit aim of “calling for attention to climbing, volatile prices” (here).

The point is that there is a limit to the price that emerging markets can pay for commodities – and the evidence suggests we are close to that point.

So if China is tightening money, we might reasonably expect commodity prices to start easing – in anticipation of declining demand from emerging economies. Yet copper tops US$10,000/t, Brent breaks US$100/bbl and cotton makes new record highs. This raises a question as to who is buying – and increasingly over the last decade, the answer has been investors.

Investment demand for commodities is something that we have looked at before (here and here and here) so we won’t labour the point. Suffice to say, the current run-up in the prices of some commodities has all the hallmarks of classic price distortion away from fundamental demand (aka ‘bubble’ behaviour). As seasoned traders will oft be heard to say – the prices have gone parabolic – meaning that speculative fervour has taken over. With the herd increasingly headed in the same direction, it will take progressively less and less to tip the balance in the other direction.

Conclusion – Just like the grotesque in Dorian Gray’s closet, high commodity prices are the non-to-hidden price we must pay for a forever young global economy. With QE2 itself passing into its twilight age, the risk/reward of being long commodities doesn’t look too flash – with diminishing upside and plenty of room on the downside. Emerging markets are already signalling weakness and the commodity currencies are showing all the signs of exhaustion. While we may not have called for the last rites just yet, the priest is in the parlour.

Disclosure – no position in base metals, long energy and agricultural equities, and nibbling at gold again.