Ever wonder how we got to the top of the food chain? Reflecting on the market’s flip from deep despair to sprightly ebullience, so do I.

Perhaps we can learn something about this type of bipolar mood swing by considering the herd behaviour of our oxygen breathing peers, for example, a school of fish. An intrepid Prof Jens Krause (see here and here) decided to see if he could control a school’s actions. He inserted a remotely controlled group of robotic fish into the mix and discovered that if his robot minions had critical mass (around 5% of the group) then he could in fact control the behaviour of the school. The herd followed the robots even if it meant swimming with the sharks (metaphorically speaking of course – no fish were hurt in conducting these experiments).

So to the markets – where are the androids?

Given the over-arching enthusiasm emanating from the finance sector, I suspect that we will find the robots there. There is a palpable disconnect between the fortunes of those banks that have ridden the money-printing asset revaluation trade and the struggles that the real economy has been fumbling through.

A quick review of JP Morgans quarterly shows just how much the finance sector has enjoyed the taxpayer backed asset reflation trade. For example, the fixed interest division booked revenues of $5bn (up $4.2bn). No wonder they are feeling good about themselves. Compare and contrast to the business of actually lending money where they continue to lose money and loans.

So I guess it’s not too surprising that the robots outlook for the market is a little more positive. Consider this forecast for 2009 and 2010 EPS for the S&P500 from Goldman Sachs (via Market Folly): 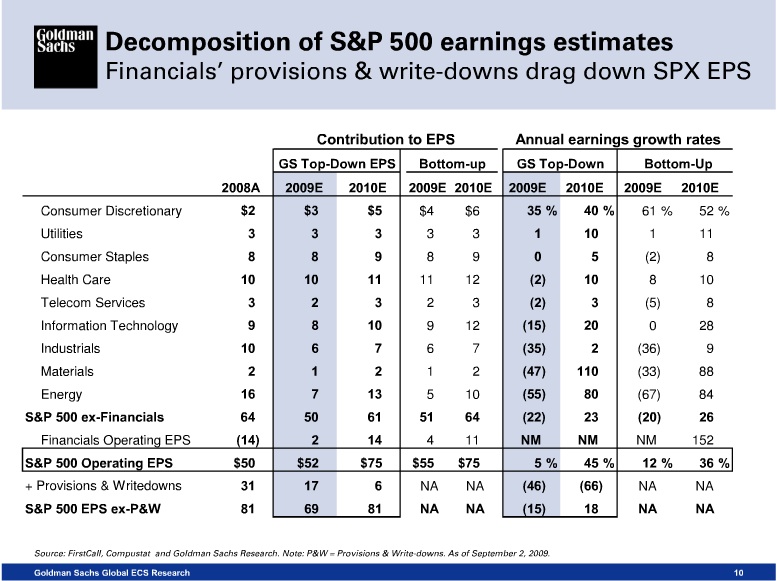 Now I don’t have the time or resources to deconstruct Goldman’s forecasts, but just to place these in context, the following is a chart of S&P quarterly EPS (annualised for ease of comparison) – via Standard & Poor’s.

Regardless of your views on the sustainability of earnings from the likes of the discretionary sector, industrials and energy, one line stands out pretty boldly – the rise in financials EPS.

Various commentators have pointed out that the financial sector is unlikely to recover its former glory. The record profits of a couple of years ago were built on leverage. This isn’t coming back soon – in fact it’s more likely to be the opposite (other than the debt hungry government). So how does this EPS forecast compare to history?

It is often said that price peaks at the same time as earnings momentum (must see if that has been tested). If that is the case, getting the call right on the financial sector’s earnings is key. Intuitively, bank earnings momentum should be peaking about now for mine. The asset revaluation trade is reaching its apogee, lending remains a side business at best, capital ratios are likely to ratchet up, and those troublesome assets are still laying in wait out there somewhere. Guess the big variable revolves around the prospects for writedowns. If anyone has greater insights, please share them.

Just leaves one final question (well two really) – who has the remote control and where are they taking us?