How Much Above Trend are Australian House Prices?

The ‘Australian housing bubble’ chorus has grown in voice recently – the IMF and the RBA, hedge funds and ‘traditional’ funds managers have all been questioning the recent price action in Australian housing. With the Fairfax stable running a week-long feature on the housing market in their various papers – the sentiment gauge is pressing deep into the red.

So assuming that Australian housing prices are over-extended, what then is the underlying trend? It is this ‘sustainable’ growth rate that we might expect house prices to revert to – whether via a long period of relative price stagnation or a shorter, sharper market correction. But first a recap of the story so far…

Let’s start with a chart of the ABS eight cities House Price Index: 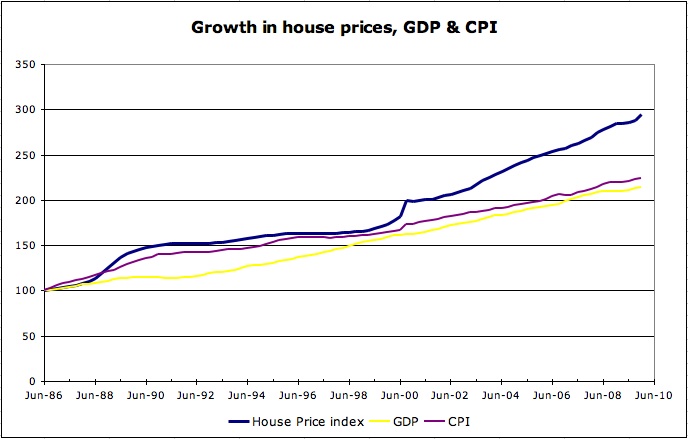 Notably, this broad index has not experienced a single negative number over the last quarter-century – not even in the post-87 liquidity surfeit and subsequent squeeze. The introduction of the first home buyers grant (to compensate for the GST) in June 2000 stands out as a step-change in prices. And from there price growth accelerated through to the present day.

What has driven the house price outperformance?

We have noted before that the rise in house prices has been accompanied by a commensurate rise in debt levels – with household debt to GDP rising from 30% in the early 90′s to nigh on 100% currently (see here) and debt to disposable income sprinting from ~40% to ~160% across the same period: 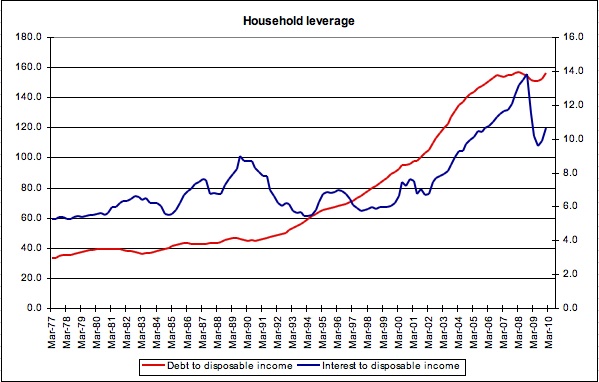 But there is more to it than that. The oft-nominated culprit is that Australia’s population growth has outstripped the supply of new housing over the last decade:

Additionally, there has been a long-running trend towards fewer people living in a single dwelling – though this fashion seems to have met resistance recently: 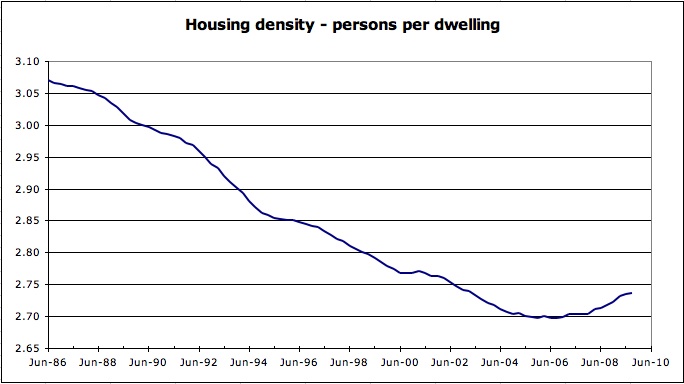 What is the outlook for supply and demand?

Turning to the nearer term outlook for the housing sector and it’s not just housing density that looks like it has turned a corner – if we run through the various factors that drive demand and supply in the housing market, it’s tempting to conclude that we are in sight of an inflexion point for house prices:

Interest Rates – the RBA was the first central bank to go to the brakes as the recovery surfaced and has made it clear that it is concerned about the impact of overzealous house price inflation. They will keep raising rates until the rise in housing prices has been stemmed.

Population Growth – current population growth rates are around 450,000 per annum which, assuming the current trend of 2.73 people per dwelling, means we need ~165,000 new dwellings per annum. Notwithstanding the recent uplift, we are still short of this mark (see here).

Notably, however, 300,000 of the annual growth is the result of net migration. This is subject to political indulgence which, with ‘housing affordability’ a pressing issue, is on the wane. By way of example, a cut to 250,000 in the annual intake would reduce baseline demand to ~145,000 dwellings.

First Home Buyers – ‘temporary’ assistance introduced a decade ago has become a feature of the Australian housing landscape (see article here). But interestingly, even this is now being questioned – with the grant’s role in pushing prices up being examined in the recently announced governmental review.

Foreign Buyers – the Commonwealth government now wishes it did not change the foreign ownership laws last year. Rumours of Chinese buyers storming the inner suburbs abound. Certainly, the decline in the number of housing loans (since the cessation of the FHOG in December) is inconsistent with the frantic auction activity (see here). Expect the Government to close the door on foreign buyers again.

Credit Availability – Australia’s big four enjoyed a bonanza of the home leading through the recent recovery. But as home prices have pushed higher, they have ratcheted back on the maximum LVR that they are willing to lend (see here).

Availability of Land – it’s a building industry cliche that it is government regulation that has driven up house prices because of red tape in getting new houses built. This is fluff. The major home builders manage the supply of new houses coming out of their landholdings to optimise demand and price – none of them (to my knowledge) is short of supply.

It’s deep and patient capital that funds the migration of land through the re-zoning process – and again, the environment has been friendly in this regard for a very long time. It’s telling that the government has included the management of zoned land-banks in its housing affordability review – there are serious regulatory risks swirling around the earnings of new home builders right now.

To summarise, we have:

Reviewing the variables discussed above suggests that the near term outlook for house prices is poor. 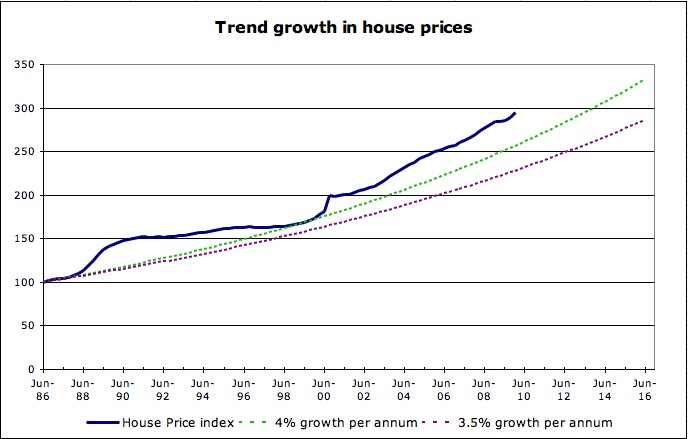 So to get back to our original question – what is the long term sustainable trend? I’ve drawn two lines on the chart above – one at 3.5% per annum representing the long-run growth in GDP – which logically is the ultimate arbiter of what a country can afford. House prices are currently ~30% above this level.

The second line illustrates what 4% per annum looks like – maybe house prices can outpace GDP by 0.5% based on our peculiar demand ad supply dynamics. House prices are currently 15% above this level.

Finally, how do we get back to trend?

Prices Correct – Australian households have never been so leveraged. This means that we are more exposed than ever to external shocks that could lead to the dreaded debt-deflation spiral (at worst) or hobble growth in the domestic economy for a very long time (not quite as bad). The result is that house prices fall.

Prices Flatline – History would suggest that a major correction in prices is unlikely – if we follow the early 90′s model, home prices could flatline for the next 5 to 10 years as the economy catches up.

Perhaps more likely in this context, particularly given a global propensity to money printing, is that inflation takes hold. Inflation is a flat tax on all and, politically speaking, is the least painful way to spread the burden of debt reduction across the economy. Ultimately, wage and asset inflation overcome debt levels.

Either which way – these scenarios suggest a more painful corrective path for the Australian economy as house prices return to their long term trend growth rate.