The OECD composite leading indicators for October were released late last week – they too seem to be confirming that the rate of the recovery has peaked:

The aggregate CLI for the OECD countries plus Brazil, China, India, Indonesia, the Russian Federation and South Africa continues to move higher just at a slower pace. (Note that the CLI’s are principally driven by changes in monthly reported industrial production.)

So to the concept that the leading indicators will signal when equities are scheduled for a correction (credit to Albert Edwards of SocGen via Zero Hedge). The inference from the analysis was that with the ECRI and US Conference Board starting to slow, they are flashing a warning signal for equities. 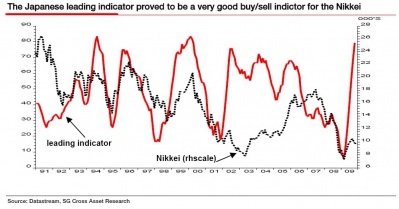 So to check the difference between the two measures following is the performance of the Nikkei mapped against the OECD’s composite leading indicator for Japan over the last 20 years both in absolute terms and as against the percentage change in the indicator: 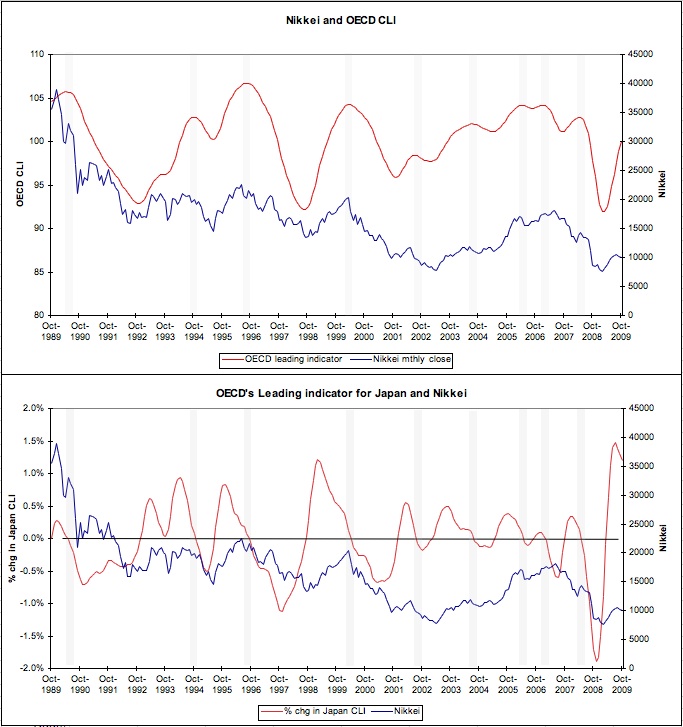 Using that same metric, if you had instead sold when the growth rate turned down, the result was 5/9 (+198 points) and 6/9 (+1479 points). (I assumed three consecutive months of declines to confirm the ‘turn’.)

Still like the theory, particularly given the view that a self-sustaining recovery is about as likely as Australia winning the world cup (or for that matter the US). Just that it might be wise to temper enthusiasm for the recent slowdown in growth as a sell signal.