The Meth Lab in My Kitchen

The analysis on this site is principally undertaken for my own benefit – the upside being input that comes from readers. As it’s a non-profit exercise based on publicly available information, the analysis tends to be more superficial than might otherwise be the case. Likening it to a do-it-yourself meth lab at least warns of the risks of placing blind faith in that little smiley face printed on the label.

If this analogy holds – then the financial press is a ‘generic drug manufacturer’ – they are a volume producer, though our expectations are that the quality of analysis should at least meet minimum standards. So when The Age publishes an article on rising bank funding costs “Big Four prize deposits as long-term funds costs rise” (here) – thought it might shed some light given our reflections last week (see here). Unfortunately, the opposite is true. It’s a confused but seemingly well-informed piece of journalism – and reads suspiciously like it is intended to paint a picture of banks being squeezed by external market forces.

A summary of the points made in the Age’s article: 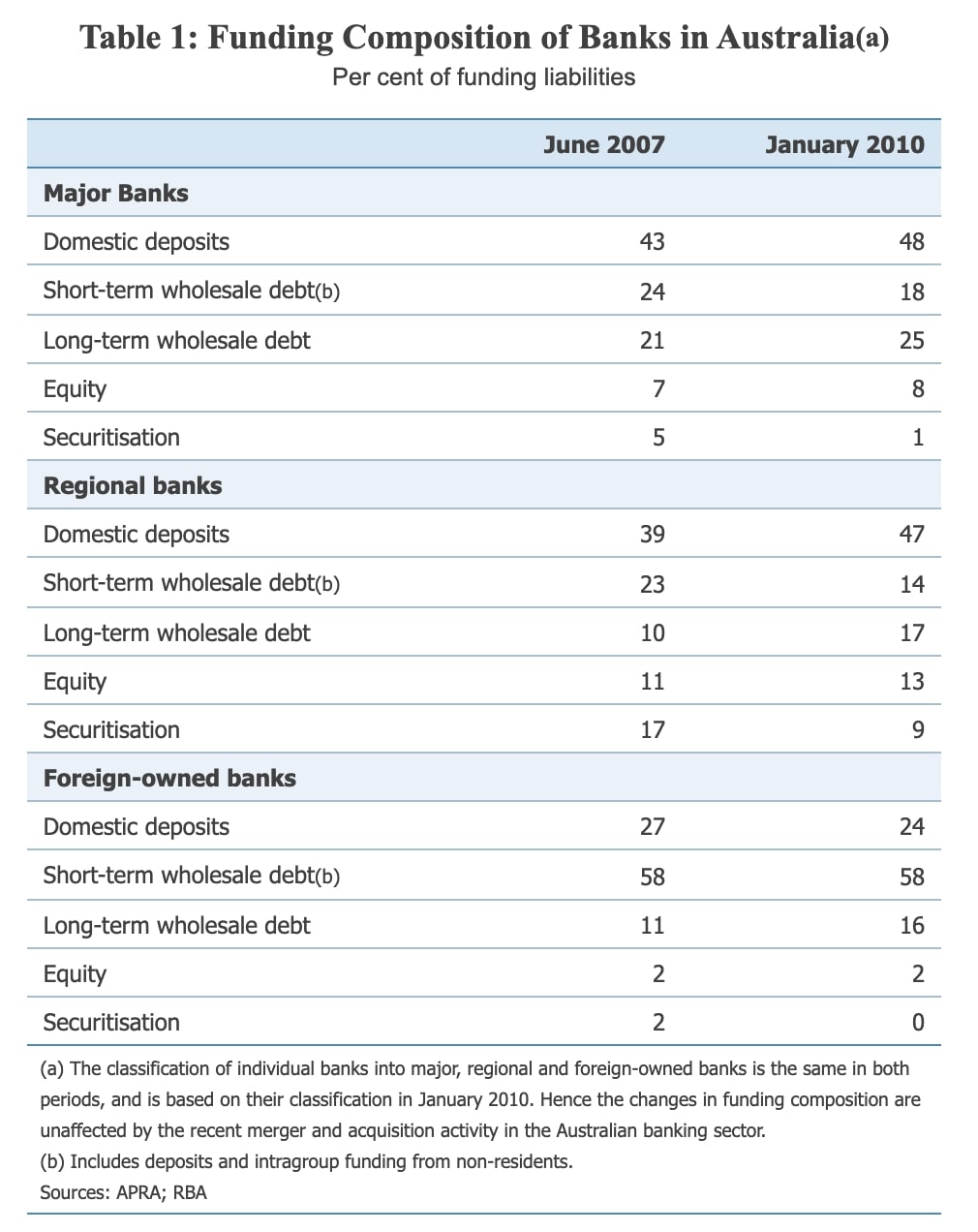 As a departure point, the following chart from the RBA (here) provides a breakdown of how the major banks funding costs have changed over recent years:

This is saying that average funding costs have risen from being flat to cash pre-crisis to around 130bps over cash currently. The principal driver of higher costs are deposited (which also provide 48% of total funding by volume). Long term funding has substantially assisted the uptrend. Then the RBA has this to say about their outlook for bank funding costs:

“If bond spreads and hedging costs remain around their current levels, then as maturing bonds are rolled over, the average spread on banks’ outstanding long-term debt is estimated to increase by about 30 basis points over the next year and a half and broadly stabilise thereafter.”

The Age’s article makes the point that the ‘average cost of funding’ will rise by an additional 10 to 35 bps by the ‘middle of next year’ (using benchmarks to short-term money market rates that are difficult to reconcile with the RBA’s). It doesn’t make it clear whether it is talking about the banks total funding requirements or just those costs relating to wholesale funding. This is critical as, if we take the RBA’s lead and add 30 bps to the average wholesale funding costs of the banks then, as they represent 25% of total funding, this adds 7.5 bps to the bank’s average costs across the whole of its funding book.

The point here is that the article from The Age infers that the rising costs of funding in the wholesale markets will continue to pressure the cost of mortgages. The RBA’s publication would seem to confirm that rising wholesale costs have impacted bank’s but will have a diminishing effect in providing further pressure in the future. Additionally, it suggests that increases in deposit rates have had an even bigger impact.

Finally, this chart from the RBA demonstrates that notwithstanding the impact of rising funding costs, the major banks’ net interest margins have actually increased since pre-crisis times:

In the RBA’s words:

“For all banks, most of the increase in their lending rates over the cash rate since mid-2007 has been due to their higher funding costs. For the major banks, however, there has also been some widening in their lending margins. Information published by the major banks in their financial statements shows that the average NIM on their Australian operations was around 2.4 per cent in the second half of 2009, about 20–25 basis points above pre-crisis levels”

In summary, it’s notable that The Age highlights the amount the needs to be refinanced and the rising costs, against a backdrop of the “consequence” that the “cost of mortgages…is set to remain high” as “banks pass on higher funding costs”. We could be forgiven for thinking that this article has blended the ingredients to a specific recipe.

(Note: one happy outcome of reviewing this article in detail has been that I discovered that I had omitted to include CBA’s wholesale funding that needs to be refinanced in the next 12 months in my analysis last week. Not that it materially changes the conclusion – $50m would represent ~50% of total wholesale funding but ~10% of total funding. The clear conclusion from the foregoing analysis is that it is deposited that are the biggest driver of funding costs – and even then net interest margin is determined by the ability of the banks to pass on higher mortgage costs, something that they have proven adept at in the recent past.)