The Real US$ Exchange and Exporting Inflation

The US and Europe are struggling to stave off debt deflation. Excessive leverage has been rolled up from under-capitalized banking systems to the top floor of the sovereign obelisk. There is nowhere else for it to go. The only question left is whether any particular sovereign’s credit is any good – as expressed through the pricing of its debt and/or its currency.

It is through this lens that the strategies being employed to solve the surfeit of debt should be understood.

Europe, locked in an unholy currency union that would make Rasputin blush, has reintroduced the debtors’ prison – otherwise known as internal devaluation. (For a definition and a little history see here.) Debtor countries can work off their debts if they subject their people to the yoke – the objective being to reduce disposable incomes while increasing international competitiveness.

The US as a single sovereign state has more flexibility. It can more easily share the pain with its creditors. It has adopted the debt monetisation solution

Is QE a form of ‘debt monetisation’?

At its the simplest the US is seeking to avoid debt deflation. To do this, the sovereign will underwrite the country’s debt mountain against its own tax revenues. The government will run a deficit to fund any social malaise. Its banker will leverage its balance sheet to fund the program – while attempting to hold up asset prices against the debt overhang.

So is the US really monetizing government debt? Not under a traditional definition – one that says ‘debt monetisation’ occurs where an issuer of a currency buys the existing debt with newly printed money. No, the independent Fed is simply conducting open market operations – it just happens to be the single largest investor in US Treasuries.

In broad pictures, the process for 2011 looks something like this… 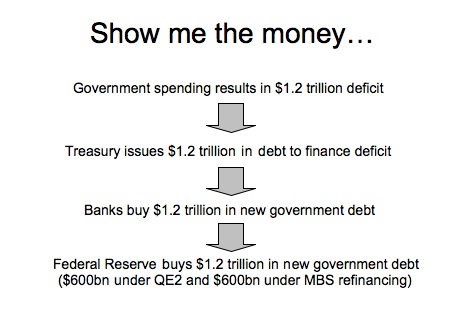 The Fed will buy the $1.2 trillion in US Treasuries by borrowing from the US banking system. It didn’t have to of course. The US government had already spent the money into existence by running a deficit. It had already borrowed the money from investors. But the Fed doesn’t want that liquidity to leave the system, so it goes ahead and buys those securities from investors.

Under normal circumstances, we might be worried that inflation might flourish under such an insanely loose monetary regime. But the traditional credit creation machine is broken – and the banks end up sitting on the $1.2 trillion now on deposit. So the Fed can finance its support of the debt mountain by borrowing from the banking system – secure in the knowledge that they won’t send inflation out of control.

This is very different from recent monetary policy regimes.

QE achieves two things. It supports asset prices on which the debt mountain is built. And it aims to stimulate the economy through the exchange rate. It is expected that the real value of the sovereign’s currency will fall. While it’s people may lose purchasing power, the state’s competitiveness will be restored.

Investors in Treasuries will take a haircut on their US$ denominated holdings. As each wave of QE rolls through, the relative attractiveness of the US$ denominated Treasuries as a store of value wanes. The government is diluting its creditors – the risk embedded in government securities rises in tune with the growing volume of debt outstanding against a static tax base. And, all the while, the US is exporting inflation – true, awash in liquidity, inflation.

Low-interest rates may not be encouraging US citizens to borrow, but their international cousins are all over it. Property prices from Shanghai to Mumbai are stretched. If China insists on maintaining the peg, then the US will export inflation – just as once China exported deflation. Competitiveness with China will be restored – even if that ultimately means bringing US living standards closer to those of the average politburo member.

So where are the risks?

Not bankruptcy – the sovereign controls the mint. Nor, seemingly, in equity or credit markets – as there is no theoretical limit to the amount of QE that can be used to support asset prices (unless there is some leverage beyond which the Fed cannot take its balance sheet). The pressure valve in this system is the exchange rate. The relative price of the US$ to other currencies and commodities. When the average US citizen feels the price of corn syrup and oil has tipped over the reasonable, we will know we have reached the practical limit to this strategy.