What is the Relationship Between RBA Assets and all Ordinaries?

The call goes out to “Down Under” to provide some further thinking as to why the level of the RBA’s assets might be a useful canary to the equity market’s coal mine (via Mish here):

I actively watch this chart and a colleague of mine updated it today. RBA balance sheet collapsed in the early part of ’08 ahead of the debacle. 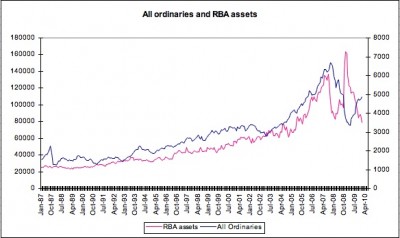 Can’t argue with the statement – the RBA’s assets did collapse. But what, if anything, is the cause and effect?

The movement in the RBA’s assets can be summarised in the following chart: 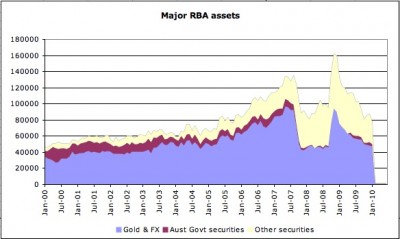 The cause of the fall in the RBA’s assets was a drop in Gold and FX reserves. Taking a deeper look inside the RBA’s trousers (not for the faint-hearted), between July and December 2007, the RBA delivered over A$50bn into swap contracts – thereby reducing it’s foreign exchange reserves. The question is why? And it’s something that has me stumped…It’s a pertinent question given the more recent decline in FX reserves again.

While I’m playing in the nether regions, an interesting side note on the financial crisis. Once the liquidity vacuum was sucking at the markets, the RBA’s holdings of other securities (that’s the MBS etc that couldn’t find a home) more than doubled from $32bn in Feb ’08 to $70bn by Dec ’08 while total FX denominated assets (inclusive of foreign securities) also climbed from Sep to Nov 08 from $46bn to $93bn.

This was funded by a combination of the US Fed’s US$30bn swap line and cash collateral from the ADI’s that were taking advantage of the funding.

These have all but normalised over recent times (with the swap facility with the US Federal Reserve being wound up in February this year).

Seems like it’s back to business as usual. So is the decline in FX reserves telling us anything?