The current selloff has the market staggering. Unlike previous tick-downs in the rally since March 2009, fear is making a comeback. Our measures of relative risk appetite have broken out. It’s reason to tread carefully cause until we get some signs of normalisation, further downside is more likely than not: 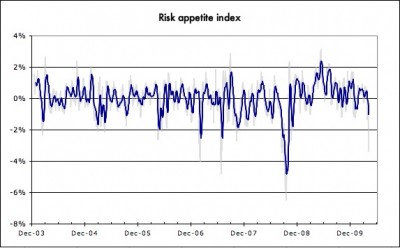 The evidence that it’s a ‘this time it’s different’ correction?

1) Uptrend since March 2009 has been broken – Uptrends in all the major indexes have been decisively taken out. With China’s stockmarkets trading below their 200 day MA, the question is whether global markets will follow. (see Humble Student of the Markets here)

2) Investor bullishness was at extremes – as measured by sentiment indicators from newsletters to the CBOE PutCall ratio. A rapid switch of the greed to fear button will have longs questioning what is fair value for equities. (See DataDiary summary from 19 April here)

3) The momentum of the recovery has slowed with fading stimulus – A lesson from the Japanese 1990′s experience was that the market goes up with government stimulus and down when the stimulus is removed. This patient needs more blood. (see Albert Edwards Global Strategy Weekly here)

4) Fat tail political risk is in the house – Before the GFC was invented, the rules of the game were that credit risk could be sliced and diced into infinitely smaller pieces. We assumed that legal and political risks were immaterial. They aren’t. The immediate question is how to price ‘unchangeable’ political risk – the unravelling of Europe, the bankruptcy of US states and even Australia’s new commodity taxes. It’s telling that gold continues to squeeze higher – there are precious few places to hide (see STRATFOR article “The Global Crisis of Legitimacy here).

This isn’t a clarion call to abandon ship. It isn’t 2008 – with margined investors having their stock dumped into the market. Sure there may be a carry trade or three that needs to be unwound, but buying on margin has not regained its 2007 highs. For this reason, will be looking to add some long exposure at my estimation of fair value (see articles here and here).

In order for the markets to retest the March 2009 lows, something else needs to happen – like China imploding in a fug of property and commodity speculation. This is a material risk – certainly, the leverage in the commodities markets that has been fuelled by the rise of financial players (read an article by Absolute Return Partners here) has as its single biggest assumption the ‘China industrialisation story’. In a real sense, Australian house price euphoria is an extension of this same trade.