Volume Rising on the S&P – What is it Telling Us?

It’s been notable that volume has been stepping higher on the S&P500: 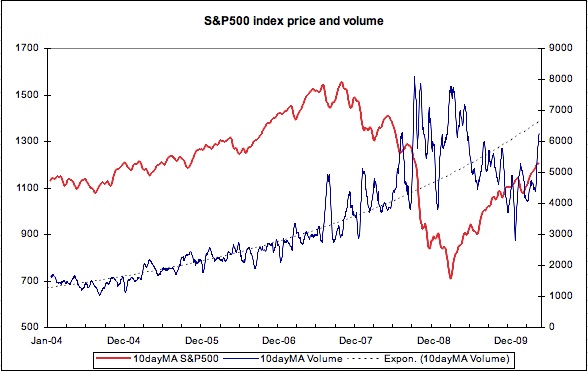 Volume peaks tend to be associated with short to medium bottoms in the index. Similarly, troughs in volume often signal some kind of top. Or course this relationship doesn’t always hold – a wicked example being that 2008 price avalanche where volume peaked around 8bn shares per day and then thrashed around below that level until the March 2008 floor was eventually reached.

Still is there some significance to the recent rise in activity? Some thoughts for your consideration…

1) It’s a ‘reversion to mean’ volume – While it’s incredible (and clearly unsustainable) that volume increased over 20% per annum since the beginning of 2004, the question remains what is the underlying trend in daily volume. On a trend basis, we may still be south of that level.

2) Buy the dip – the risk compression trade is alive and well and about to enter its next phase. This would have more credibility in my book if risk appetite had also blown out already. It hasn’t. 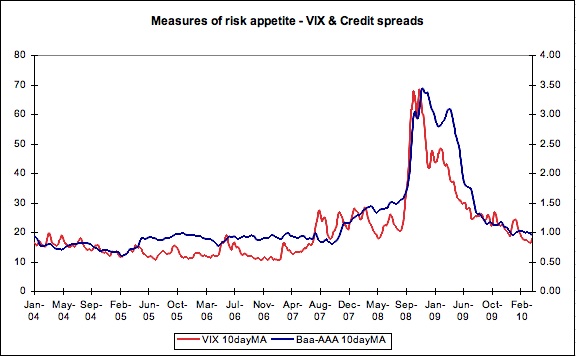 Credit spreads in Europe may have dissolved in a gelatinous mess, but the US credit markets remain blase about this state of affairs. Similarly, the VIX has sprung to life but not nearly enough to signal that we are in a renewed bout of risk aversion. The relative calm can be seen a little more clearly via our risk appetite index: 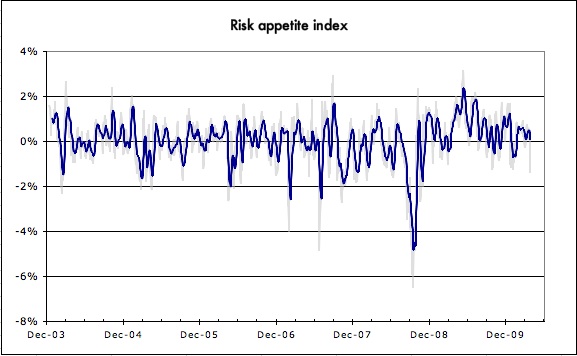 As an indicator, we would normally expect the index to have dipped towards -2% before the ‘panic’ volume spike was upon us.

3) Risk aversion is on the rise – My best guess is that the rising volume is part of a change in trend – that’s it’s more likely to represent distribution than accumulation. Witness the Merrill Lynch hedge fund position report (via Market Folly) suggesting that funds have been reducing their equity exposure. If this is the case, then it’s likely that there are a few even higher volume days in the wings.