Chinese Equities and the Commodity Conundrum

The following chart throws up some interesting questions about the Chinese growth engine. In this we are looking at the relative performance of the Shanghai Composite as against commodities prices (as broadly mapped by the CRB index): 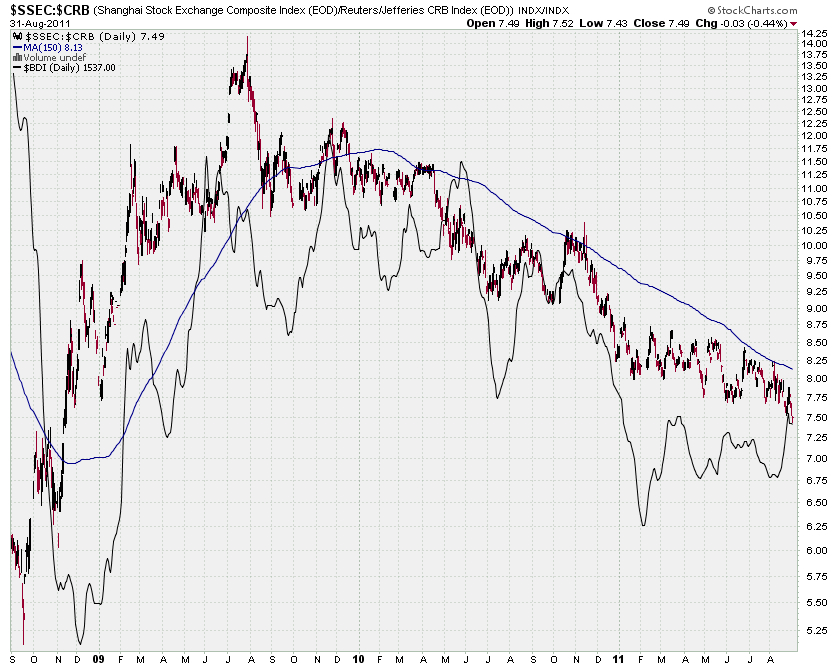 So Chinese equities were first to accelerate out of the GFC lows fired up as they were by the sizeable fiscal stimulus that was directed particularly at infrastructure expenditure. Equities ran hard and fast peaking in early August 2009.

Meanwhile, commodity prices themselves didn’t bottom until March 2009. And while they responded to the Chinese stockpiling that was conspicuous through to late 2009, prices themselves were relatively restrained in their appreciation. Until expectations of QE2 began to surface that is. From the correction lows in mid-2010, commodities prices have been on a tear.

For mine, this latter leg in commodity prices has been an investor driven phenomenon – whether it’s a response to the supercycle story or the fear of the failure of paper money. I’ve slotted the Baltic Dry Index into the background – as an admittedly flawed indicator of Chinese demand for bulk commodities – as it seems to make the same point.

Putting aside the issue of what factors have driven commodity prices higher, the fact remains that Chinese equities have been in a relative downtrend ever since the middle of 2009. The obvious conclusion is that higher commodity prices are bad for an infrastructure-build driven GDP.

Is this exposing a key flaw in the Chinese growth model – that the more (debt-funded) investment is ploughed into infrastructure, the higher commodities prices are driven and the larger the problem when this model is brought to its inevitable end?

It’s a valid question – as when we look inside the relative sector performance of Chinese equities since the beginning of 2009 we see that it is the energy and materials sectors that have been ‘holding up’ the composite index – or put another way, it is the financials in particular that have been hanging heavy around the neck of the Chinese equities markets. Are the financials hinting at what is to come?