Another month chalked up on the wall, and not much has changed for the little Aussie battler. It is trading around 1.05, just as it was when we last had a look (back on 26 May here) – but the pressure is building for a break one way or another… 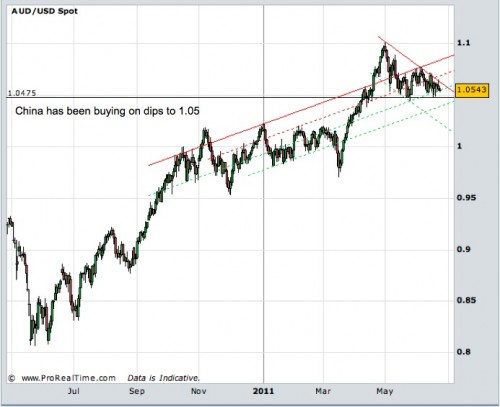 All things considered, it has held up remarkably well. From all reports, its been central bank buying that has provided the support – everyone from the Chinese, to the Middle East, to South America, to Eastern Europe have been said to be on the bid.

The question then is who has been doing the selling?

One answer is hedge funds that have been taking advantage of the relative strength to exit long positions. We can see that open interest on the Aussie dollar futures contract has fallen back from its highs:

And that it’s been the leveraged accounts that have been closing out positions:

Historically, hedge funds have a reasonable track record in anticipating the changes in currents in foreign exchange markets. Hence the weakness in the money flow index as derived off the futures markets bears watching.

Still, there’s no denying a central bank with a large cash balance if they have a mind to buy a currency whatever the price – barring a full-blown currency crisis Bank of England 1992 style. Couple this with the anticipated inflows that are expected to support the capital spending commitments over the next 12 months and you can make a pretty convincing case for the Aussie dollar to revisit its highs. It could even break to news highs if a global government of substance decided to get the cheque book out again.

Without additional government stimulus, however, I remain positioned for more downside. Risk markets are showing a distinct unwillingness to embrace a world without monetary support. If the central bank bid were to step back, then I think we can expect a stop loss frenzy on a break of 1.0475.

Concerns Are Still High on Netflix Despite Topping Estimate

Blackberry Is Set to Log the Best Week in 20 Years