US Dollar plunged to fresh two years low as investors reacted strongly over the new trade tensions between the world’s largest economies along with rising concerns over slower than expected economic recovery. Commodity currencies inched up against the US dollar.

The reports of increasing short-bets have also impacted the US dollar. The questions over the greenback’s ability to sustain the status of reserve currency have been supporting bearish sentiments.

Almost 36% of fund managers said in a Bank of America survey that they have short positions on the currency this month, representing an increase of 30% compared to the last month. In addition, the report from Bank of America hinted that 40% of the fund managers expect a sharp drop in the US dollar reserve amount.

“This is the most bearish sentiment has been in our survey history, while positioning was last this underweight USD in 2008,” Banks of America said. 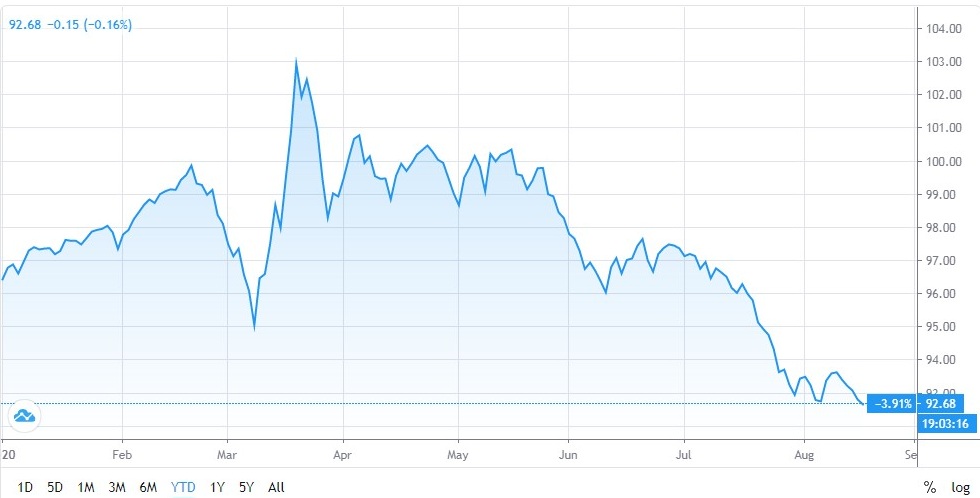 The disappointment over the second federal aid stimulus program has also contributed to bearish sentiments over the last week. The US dollar index is currently trading around 92.68. This is the lowest level in more than two years.

“Positioning remains stretched on longs, making the cross vulnerable to a turn in sentiment, which has for a while been that of the EU handling the COVID shock better than the US; this may change as US figures peak and Europe fights the second wave,” said Arne Lohmann Rasmussen, Chief Analyst, Head of Cross-Scandi Research at Danske Bank.

Euro remains strong against the US dollar while gold prices rebounded on the dollar weaknesses. Gold is currently trading around $1995 an ounce, down slightly from a previous all-time high of over $2000. The market analysts expect more gains for the yellow metal in the short term due to higher short bets on the US dollar.

US Dollar Back Above 93 Levels as Vaccine Optimism Fades

US dollar index is back above 93 levels as investor’s optimism over the coronavirus vaccine faded in the past two sessions. The rally in the USD index...
November 12th

US Dollar Jumped to 4-week High on Lockdowns, US Elections

US dollar bounced to the highest level in the last four weeks as a record level of coronavirus infection across Europe and the United States has enhan...
November 2nd

US Dollar Trades in a Tight Range, Gold, and Riskier Assets Fall

US dollar continues to trade around the 93.40 level against the basket of six major currencies amid the uncertainty regarding the stimulus package and...
October 15th
0

What Will Happen to the US Dollar After Joe Biden’s Inauguration?

US Dollar Back Above 93 Levels as Vaccine Optimism Fades

US dollar is steady, but analysts see bull case

4.1 Rating
With a trading ethos based on core values like integrity and fairness, AvaTrade is an established international Forex broker
Open Account
4.2 Rating
eToro is making trading accessible to anyone, anywhere, with the goal of reducing dependency on traditional financial institutions.
Open Account
More Broker Reviews